Drew’s first day back with us in the school, got to show him how we use the game shifting board.  need to model more of this.  did a popcorn-skyhands game to share something we wanted to do today.  everyone used kanbans. watched crash course on mughal empire. geoguessrd. democracy now! = Ferguson. cedar weaving preparations. helping nick get deeper into kanbans.

What was your most excellent adventure?

Watched Bill and Ted’s excellent adventure with the boys two nights ago, so this is a feedback loop. 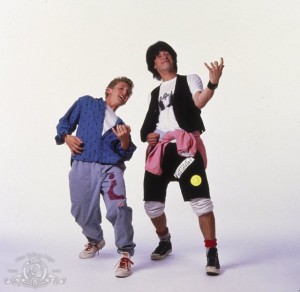 The most excellent thing that I did today was to get the next step of the cedar weaving workshop happening.  A lot of the earlier steps did not really require the students to be involved.

Yesterday Drew and I had a crazy wild adventure just getting the ‘jerry stripper’ from the leather supply store.  We had Dim-Sum.  Then discovered we were close to the Puget Sound Community School and so we cold-called them, spoke to a lovely guy named Sam.  Then after long catch-up talks, we went and checked the place out, got a tour and discussed stuff in detail.  Need to follow up on that by meeting the Founder Andy Smallman (who was sick yesterday).

Then we left and wandered, discovered an Arts Warehouse community space that had some amazing things inside, but was sadly an 18+ space because of cannabis friendly (legal? in Washington State).  Then we wandered across a tent city set up by/for some inspiring people (men/women/families) who were homeless.  Eventually we found the Jerry Stripper at the Leather Store.

Then we wandered across Seattle for another hour before we stopped in a bar, had a beer/burger, played Ms. Pac-Man (we were shocked at how good we were).  Oh and the Decor of the bar (the unicorn) was made by one of the people from the arts warehouse so we saw the people who gave us a tour of their space again! (small world).  Then we went to a coffee shop, drank coffee.  Drew begged for a cigarette.  We had our weekly ALF call.

Then we walked to a bus stop and caught the bus home to Everett.  There were helicopters in the air and we had no idea why.  Then we got news of the Ferguson verdict.  Seattle people were protesting and we got one of the last buses home before all that happened. Oh and then we (actually, I) decided we should walk the distance home instead of wait for and pay for another bus.  It was a long day of walking.  So we celebrated by watching Watchmen: Directors Cut!

Here’s what my Kanban looks like at the end of the day: