Today we pushed ahead with extra students and continued to bring focus to the kanban process as a way to help students use their time more effectively. (I Still want to get all the computer stuff done from yesterday).  more weaving happened.  it was the most awesome thing that has happened since i’ve been here. 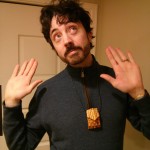 What is something you did today without electricity?

Today we did a whole lot of stuff with Sweetwater towards the weaving workshop.  So much stuff that we actually ended up making our first weaving project.  This was a great surprise.  Yesterday we had spent a lot of time preparing the cedar for weaving, but I knew that there were other steps that needed to be completed.  Having been unable to find a demo of the jerry-stripper in action on youtube, i had no idea how long this would take.

When everyone joined us at 12.30 and it was time to do the next step of weaving, it turned out to be a very solitary affair.  I had to put the blades into the stripper (which cuts the cedar into small, even strips).  We had to add extra blades because Sweetwater wanted strips of different width.   So we had to get blades that were the wrong shape to fit.  Weren’t sure any of this would work.  Together it did.  We needed a bunch of people to hold the Jerry’s-Stripper so that it didn’t budge too much as I pulled it through.  This gave us long, thin strips of cedar.

Thankfully the next step was one that everyone was participating in equally: we then had to take a knife and split these thin strips in half.  This was some time consuming work.  It required a bunch of patience too.  Rushing this process, you could end up with uneven thick or thin short and longer strips.  Sweetwater assured me that it wasn’t too big a problem.

Now with all of the material ready (and soaked) Sweetwater started to do a part of the weaving.  We all wanted to start too.  So we did.  This was after the hour of preparation.  Step after step we all worked towards a product we had not see completed.  I learned that fine weaving work is very time consuming and requires a lot of attention and patience.  Most people were involved in the process, though not everyone kept it up to the end.  A bunch of the students realized that they had been doing the weaving for more than 2 and a half hours so they decided to stop and go and do some of the other things they’d planned to do today.

*Edit – over the next two days we managed to fix up and complete the weavings of all of the other students.

After following Sweetwater’s next steps I was able to finish up my first weaving project.  We threaded through a piece of leather in the back and then had to tie it off.  I decided that I wanted to have mine hanging across my sternum.  Also I wanted it to have sliding knots so that I could give it as a gift [Sweetwater says you always have to give the first one you make].  This way it could be adjusted for the person that I give it to.  After a quick tutorial on youtube, I was able to finish this up.